Oooof, bad title. It’s early. I also woke up at 4:30 AM dramatically smacking my face with my arms because I had just been dreaming about a massive scorpion-wasp flying right for my face.

Not a big bug fan, if you can tell.

Karma Longtin led a fantastic class at Karma Yoga Studio on Sunday, emphasizing the subtle connection between the jaw muscle (the masseter, more precisely) and the hip flexors. The masseter symphasizes with the hip flexors, as both areas carry massive amounts of emotional tension. In addition, the masseter is one of the strongest muscles in our body (in terms of scale-to-size), prodcuing 117-265 lbs of force (vs. 974.99 – an Eskimo descendent!!), while the hip flexor is the “seat of the soul”, being the muscle in charge of our walking and the first to react when we’re about to fall.

You can do jaw muscle exercises (which I’ll update on the yoga/physio page) and also manually massage out your own jaw. Here is a small doodle I did for great core activation exercises: 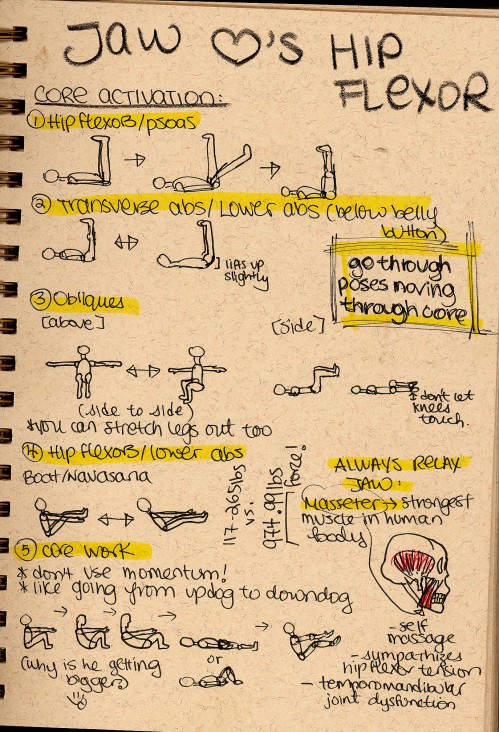 Going through blog posts (1870 of them!), which actually has been one of the most invaluable learning tools so far, as Ayr has been extremely transparent with the building of the company. The only thing made largely confidential are things relating to investors and workers.

Coming up with a logo: focus on the sound, color, texture, type, environmental influences it creates.

Another thing I love is their food development meetings. We got to taste test a lot of up and coming menu items, as well as analyze how the day’s Chickpea plate was (Pickled veggies + salad + chickpeas + hummus). 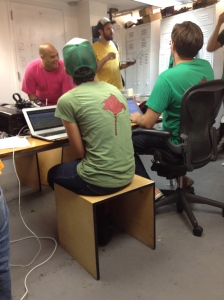 One thing I loved that we tried was the lovage soda. It tasted almost like celery juice, with a little more intensity. It sounds strange, but it was actually very refreshing.

Lovage: has a slight taste of anise and also reminiscent of caraway (thus pairs well with things from Sauvigon Blanc, fennel, mint, basil, tarragon, etc.) It is rich is thymol and carvacrol, an essential oil of thyme, ajowan, sage, basil, rosemary, and mint.

Here are some excerpts from an awesome book called Jekka’s Herbs Cookbook: 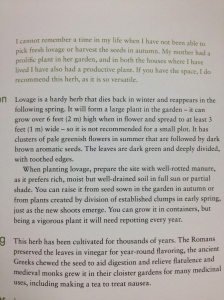 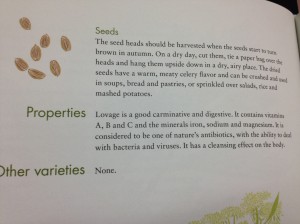 Tried Peace O’ Pie, the local vegan pizza company, for the first time with my partner in crime Kara! We ordered the The Fresh: pesto (but it came with tomato sauce instead. Dissapointment 😦 ), broccoli, onion, and roasted garlic; as well as The Buffalo Chicken: tongue zapping buffalo sauce (as they claim – didn’t really taste it much), onions, and spicy soy strips. Conclusion? Decently good. The vegan part wasn’t so much the issue, but the pizza dough was pretty dissappointing (I’m also a fan of crispy flatbread, so a little biased. But it was very bland) and the flavors were underwhelming, although the spicy soy strips were delicious!

Last night made Rosemary Shortbread Cookies with my friend Alice, as we were inspired to do so my Harvard graduate Joanne Chang’s book, Flour. Definitely not gluten or vegan friendly, but was such an interesting concept (and I’ve never made shortbread either!) that I was dying to try. I loved the savory kick to it and am planning to try it again…vegan?! Does shortbread even work vegan? To be continued… I also threw on some cinnamon for a few bites and found the rosemary + cinnamon surprisingly pleasant. 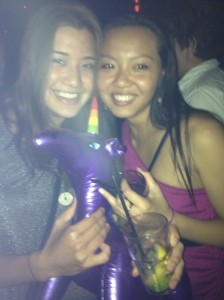 Also last shout out to: Nutmeg & eggs. I’ve done paprika before, but nutmeg? Who knew a pinch would be such an interesting twist. Becomes more like dessert than savory breakfast!